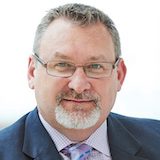 James M. Metz, MD serves as the Chair and Henry K Pancoast Professor of Radiation Oncology for the Perelman School of Medicine at the University of Pennsylvania.  He is also Associate Director for Clinical Services and Programs at the Abramson Comprehensive Cancer Center.  He has overseen the development and operations of the Roberts Proton Therapy Center at the University of Pennsylvania, which is the largest and most advanced proton center in the world for cancer treatment.  He has been instrumental in developing new technology for the delivery of proton therapy to cancer patients and an international leader in the field.  He has led the integration of new and novel technologies for patient treatment for a variety of cancers.

Dr. Metz is also Executive Director of OncoLink (www.oncolink.upenn.edu), the award winning Internet resource from the University of Pennsylvania that was founded in 1994. Dr Metz leads OncoLink’s mission to help cancer patients, families, health care professionals, and the general public find accurate cancer-related information online.  He has been in this role as Executive Director since 2014 and was previously Editor in Chief since 2000.  Dr Metz has developed large patient databases for research which also interact with Electronic Health Records to automatically pull discreet data to ultimately develop predictive analytic programs. The website has led the way in online education for cancer patients and healthcare providers, receiving numerous awards and recognition from most major authorities as one of the best cancer information websites in the world.  Most recently, the OncoLink team received the CPEN Excellence in Patient Education Award in October 2018.  Its reach is international in scope, with over 3.9 million pages served per month over the Internet.

Dr Metz specializes in the use of proton and conventional radiation for the treatment of gastrointestinal malignancies.   His favorite days at work are taking care of his cancer patients, from which he learns more about life than anything else.  Out of work, he enjoys spending time with his daughter and traveling the world.  He also enjoys training his Newfoundland to be a cancer therapy dog.